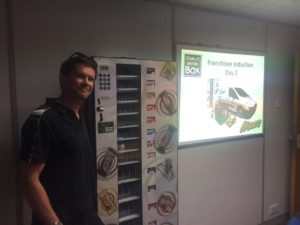 Vending solutions and ‘food-on-the-go’ company, Montagu Group, which acquired Snack-in-the Box (SITB) last month as part of its takeover of Uvenco, is welcoming SITB’s first new franchisee since the acquisition.  Alex Hall has taken over the Leeds area, due to the retirement of the former franchisee.

Montagu Group, which has grown significantly since its inception in 2017, bought the trade and assets of three businesses from AIM listed Uvenco UK PLC in June 2018; namely Uvenco Vending, Snack-in-the-Box and Drinkmaster.  The group operates more than 25,000 unique points of sale across Britain, the majority of which are vending machines.

Mark Stone, COO of Montagu Group, comments:  “SITB added a new complementary area for Montagu Group, following the acquisition.  As a UK-wide franchise operation, run through local franchisees who provide honesty boxes and vending machines, SITB is operating successfully and as new owners, we saw no need to make any major changes to the business.

“Alex is a great addition to our franchised network and his background will no doubt help him with the key area of business development.   Over the next few weeks the SITB team will be working closely with Alex in order to hand over the existing client base and we will then continue to support Alex to ensure that his business plan for the franchise is met.”

Sean Cleveland, sales director for SITB, explains: “We are delighted to welcome Alex to the SITB team.  He takes over a successful established business with an existing client base of more than 160 vending customers, across the Leeds area, covering Pudsey, Leeds city centre, Gildersome, Morley and Batley.

“Coming from a marketing background, having previously worked for a large ‘blue chip’ company, Alex decided to make a change and run a business for himself.  He wanted something that was simple, with a proven track-record and ideally something that didn’t require any real technical expertise.”

Specialist vending-solutions company, Montagu Group, is owned by the Hutchinson family and has completed a number of major acquisitions since its inception in 2017 turning over nearly £50 million per annum and employing 600 people.