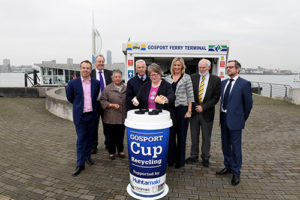 Environment Minister Thérèse Coffey has introduced a brand new recycling initiative for paper espresso cups in Gosport – mentioned to be the primary of its type in the United Kingdom.

Created thru a partnership between Gosport Borough Council and paper cup producer Huhtamaki, the scheme will pilot a set and recycling provider for used espresso cups for citizens and companies.

It will supply devoted cup recycling boxes at strategic websites throughout Gosport together with the ferry port (utilized by commuters in addition to vacationers) and council-owned premises akin to the city corridor and the recreational centre, with plans to increase assortment issues to major prime boulevard places, native workplaces and shipping suppliers someday.

Commenting at the scheme, Environment Minister Thérèse Coffey mentioned: “I’m very happy to peer Gosport Borough Council and native trade coming in combination to take sure motion to extend the recycling of cups. Tackling paper and low cup waste is an important method to give protection to the environment and this can be a nice instance of the way collaborative motion will have an actual affect to make recycling even more straightforward.

“This is exactly the kind of initiative that we would like to see following the launch of our 25 Year Environment Plan.”

Local MP for Gosport, Caroline Dinenage, who additionally attended the release added: “I was delighted to invite the Minister to Gosport to launch Huhtamaki’s innovative new recycling scheme. Taking such positive steps to allow single-use cups to be recycled is great news for the environment and for the local community.”

Residents merely want to make certain used cups are empty prior to keeping apart the lid from the cup and striking each pieces in a devoted bin. Cups and lids shall be recycled into merchandise akin to lawn furnishings, park benches and flower tubs which may be utilized in and round Gosport. The initiative is underwritten via Huhtamaki and can pass reside in February 2018.

Cllr Mark Hook, chief of the Council, mentioned: “We’re delighted to be able to support such a pioneering scheme, which makes it easier for residents to recycle coffee cups on the go.  We’d encourage all local businesses and residents to get involved and help make this a success.”

Neil Whittall of Huhtamaki added: “The cups we manufacture in Gosport are sustainably sourced, responsibly produced and fully recyclable. However we recognise that many are not being recycled and we are actively working to change this. Improving cup collection and recycling infrastructure in Gosport will help local people make a difference and improve recycling rates. We hope this new initiative will create a blueprint for similar schemes across the UK.”