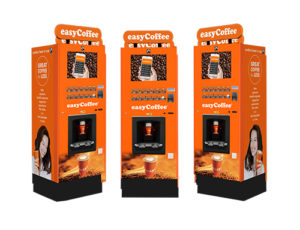 Global IoT connectivity specialist, Eseye, has launched its ‘2021 State of IoT Adoption: Smart Vending’ report which looks at the current challenges facing IoT decision makers in the Smart Vending sector in both the UK and USA.

In 2020, the global smart vending machine market was valued at $4.6 million, with an expected annual growth rate of 10.47% until 2027. Vending machines are a hugely convenient part of everyday modern life. However, traditionally, they have been notoriously resource-intensive for businesses to operate and manage.

Fast forward to 2021, smart vending machines connected via IoT are revolutionising the industry. According to Eseye’s research, 43% of professionals within the sector, say the biggest benefit of IoT adoption is that it allows them to enter new markets and deliver new lines of business or product lines. Other benefits include helping smart vendors to increase their profits and reducing costs through increased efficiency.

However, implementation is not without challenges, and overcoming these is entirely dependent on a reliable connection between the device and the network. The two main challenges smart vending suppliers have, include:

• Cellular connectivity; nearly half of all respondents (49%) named this as an issue.
• Physical and payment security of devices; a worry for 41% of respondents.

Other key findings include:

• 74% of respondents said their IoT project failed to deliver all the benefits anticipated at the outset, claiming it was only ‘somewhat successful’.
• 91% of the smart vending respondents said that IoT is a priority for the business in the next year.
• 86% of smart vending respondents are planning to increase their spending on IoT in the coming year.
The study was undertaken by independent research organisation, Opinion Matters, among 500 senior decision makers (250 UK, 250 USA) and implementers of IoT strategy within five sectors.