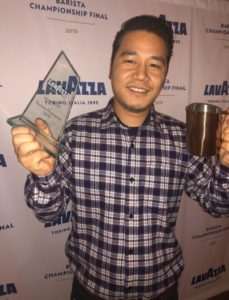 The match put six best baristas from a few of London’s best hospitality places to the check, with Kumar Ghale from Côte Restaurants popping out on best.

Kumar surpassed the opposite proficient contenders to be named as Lavazza’s UK Barista Champion 2019. As a part of his prize he’ll win a Speciality Coffee Association Intermediate Barista Skills accreditation and a as soon as in a life-time shuttle to the Lavazza headquarters in Turin.

The barista pageant aimed to offer a platform for baristas to show off and carry their skills.

It began in August with a heats level which noticed 150 applicants exhibit their barista talents to safe a spot within the semi-final. Following a semi-final pageant at Lavazza’s Training & Innovation Centre in London, the six finalists went head-to-head in a gruelling last spherical.

David Cutler-Colclough, logo ambassador & UK head of Training Centre at Lavazza, stated: “We’ve seen some truly amazing talents come out of this competition. We value the work of baristas, so this competition is a great opportunity for us to not only celebrate our dedicated customers, but also to spotlight the role baristas play as an integral part of our business and further showcase our commitment to the community.”