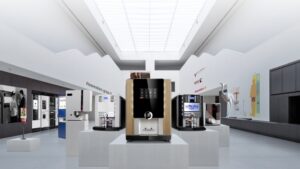 Rhea Vendors Group has issued a call to action to the business world by inviting different entrepreneurial firms into a virtual setting to hold discussions, develop ideas and try to predict the new economic landscape.

The company has decided to hold an online event embracing its values of innovation, social sustainability and culture, in which businesses will exchange new ideas, analysis and projections on which to effectively build future projects.

The ‘digital lounge’ will take place on rheathinktogether.com which goes live on 21 October 2020.

“Here at Rhea, we asked ourselves what we could do to give substance to the word ‘resilience’, often incorrectly used these days. We then looked at the principles that have guided us for the past 60 years with the aim of bringing them back to a society and economy that has seen significant transformations of lifestyles and business models,” explains Andrea Pozzolini, chief executive of Rhea.

“But we don’t want to do it alone. We believe that lots of people, like us, can help to create value starting from their own past, in order to map out new business paths. So, we will open our doors and invite people from different worlds into a virtual lounge to share their experiences and visions for the future, so that we might then overcome challenges together, develop new ideas, and make the most of any opportunities that arise.”

To run this virtual lounge, Rhea has chosen three Italian artists for whom culture, innovation and sustainability are the guiding principles of their path to personal and professional success and who, like Rhea, represent the excellence of ‘Made in Italy’ in their respective fields.

Davide Livermore, a director of opera and theatre, has staged performances for major national and international theatres from Philadelphia to Tokyo, in addition to having opened two consecutive seasons of La Scala in Milan, with Attilain 2018 and Toscain 2019. Today he is the artistic director of the National Theatre of Genoa.Through his friendship with Carlo Doglioni Majer, he has been a part of Rhea’s world for many years.

Davide Scabin, an award-winning chef at Combal.zero in Rivoli, is one of the world’s most admired Italian chefs. Renowned for his creativity and innovative experimentation, he was enlisted to create ‘space food’ for astronauts in 2013.

Simona Ghizzoni is a photographer and women’s rights activist. Her work has won awards from World Press Photo, POYi, and the Aftermath project, and she has received the Burn Magazine Emerging Photographer Grant and the Sony World Photography Award.

Mr Pozzolini said: “For Rhea, culture, innovation and social sustainability are deeply interconnected values whose common denominator is doing business. It is impossible to innovate independently of the cultural and social context in which we operate. To innovate, you first have to listen to what the new demands and trends will be, but also the complexities and impediments. And that is what will happen in our virtual lounge, stimulated by three illustrious thinkers and by distinguished managers and professionals in the areas of innovation, business culture, and ethical sustainability actions aimed at improving personal well-being and environmental conditions.”